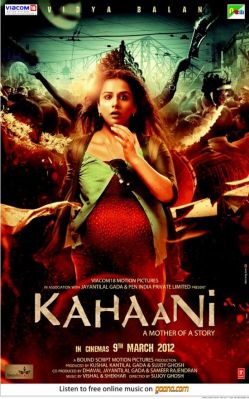 When I learnt that Sujoy Ghosh was the director of this flick, I admit I was a little skeptical whether the movie would be worth the trip to the movie hall. After all, his last two directorial ventures were, shall we say, complete failures. But one person changed my mind; Vidya Balan. She is undoubtedly this generation’s most talented female actor to grace the big screen. The fact that she was this “story’s” protagonist was reason enough for me to catch the phillum as soon as possible in the theaters.
Kahaani is the story (pun intended) of Vidya (or Bidya if you’re a stauch Bengali) Bagchi, who has flown from London to Kolkota in search for her missing husband who it seems doesn’t exist! The premise takes off into a further complicated nexus as her quest soon gets entangled in a much larger web of government conspiracy, national security, mistaken identity and treason. Vidya’s search leads her into many precarious and life threatening situations while dealing with all sorts of characters in the city of joy during it’s most vibrant and chaotic period of the year, the Durga Puja.
Ghosh seems to have learned from his previous follies and perfected his craft as the narration of the movie is absolutely brilliant. There is no element shown to the viewer that does not play a part in the overall development of the plot (Not even the simple one liners spoken at certain junctures!) The pace of the story and the suspense keep you hooked on from start to finish. And the climax is one that will surely get you to go “What the F**k!”. After a long long (long) time has a director managed to pull off a good thriller movie in Bollywood. And the absence of the usual naach-gaana during the movie, makes this so much better to watch!
The movie does a great job of depicting the city as a silent character and cast member of the story as several scenes and camera shots encompass the life and size of the bustling metropolis. The backdrop of the Durga Puja celebrations suits the thematic nature of the central plot very well and is explained beautifully at the end vide a cool voice over by the Great Amitabh Bachchan himself.
The presence of actors, as compared to “stars” in the movie alleviated the acting quotient of the cast by a couple of levels and the performances from EVERY single cast member are top notch. There is no doubt in my mind that Balan has safely secured her first nomination for this year at all the major awards. But credit is also due to the other actors who should, in my view, also be considered for recognition as stellar supporting cast members. Parambrata Chatterjee as the upright local police officer helping Vidya and Nawazuddin Siddiqui as the arrogant honest and a rather prick of an Intelligence agent are TOTALLY praiseworthy.
Kahaani is indeed a great and absolutely well thought and brilliantly executed movie which deserves your hard earned money and invaluable time at the movie halls. Seldom do you come across a hindi movie that challenges your intellect and delivers an entertaining story in return. The fact that this review was written at 5:30 in the morning the day after I watched the movie should speak volumes of how wildly amazing the flick is! Without batting an eyelid, this one is a sure shot ***** stars!