The year has almost come to an end and what a year it has been for movie going audiences! I certainly had a ball watching the wide array of movies that the big (and small) studios threw in our direction. But not every one of them measured up to my expectations. Some were great in bits and pieces, others were sore disappointments, while some shined like gems.

Best Action Flick – The A Team

The re-imagined cult action series from the 80’s makes its debut on the big screen with a bang. With Liam Neeson and Bradley Cooper, the new A-Team does a whole lotta justice to their small screen avatars. The sheer madness and insanity involved in the action sequences make this my favorite action flick of the year. And yes, “I love it when a plan comes together.”


The long awaited sequel to the cult classic “TRON”, may not have the same appeal as its predecessor, but the flick scores pretty high in the visual effects and imagery department.
The updated Game Grid and its inhabitants make for some uber cool looking neo-mancers. The highlight as in the first film, is of course the light-cycle races and the Disc Battles. The flick also has some truly orgasmic background score by the techno duo Daft Punk.


I have to admit, I was skeptical about the success of this one. Making a biographical flick of someone who is merely 24 didn’t really sound that interesting. Especially if that person happens to be a Geek. But David Fancier did a fantastic job narrating the story behind the youngest billionaire in the world. The background score by Trent Reznor and Atticus Ross elevates the brilliance of the movie exponentially.

Best Animated Flick – How To Train Your Dragon


Although I caught this gem on the small screen, the visuals of the animation were still awesome. Not to mention the characters and the overall Story were an absolute treat! The other contenders (Toy Story 3, Despicable Me and Shrek Forever After) for this category were also great, but this one stands apart for its great one-liners and numerous heartfelt moments.


Featuring two of the best TV comedians, this flick may have failed to generate box office buzz, but was my favorite comedy flick of the year, beating even Due Date and Get Him To The Greek.
Both Tina Fey and Steve Carrel have had substantial background in comedy and have successful TV shows of their own. So to watch them together was to hard to pass up. The comic chemistry between Carrel and Fey is simply amazing. I would pay to watch them in another movie any time!

Best flick of the year – Inception 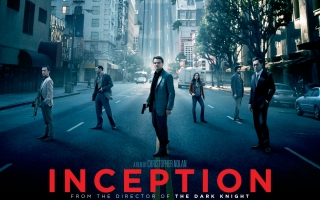 Without a doubt, this has to be the best movie of the year. The intricate plot, the plot within a plot, the back stories, the concept, it all just made this flick an absolute treat to watch. Nolan draws on his experience of working on big-budget flicks (The Prestige, Batman Begins, The Dark Knight) and weaves it ever-so skillfully with his master story telling ability (Memento, Insomnia) and brings to audiences a movie that is destined to be one of the best movies of this decade (maybe even this century).

Special Mentions
Although not covered in the categories above, there were a few other movies that do deserve a mention of their own.

Iron Man 2
The sequel to John Favreau’s rendition of Marvel’s Superhero gives RDJ plenty of room to ooze his charm and wit. Not to mention a sultry Scarlett Johansson and the evil maniacal Mickey Rourke.

Due Date
Another RDJ starrer, this one was essentially a Road Trip gone wrong thanks to the shenanigans of Zach Galifianakis. Although not as hilarious as some comedies, it did tickle the funny bone now and then.

Alice In Wonderland
Tim Burton’s interpretation of Lewis Carroll’s classic has his signature style all over the flick, which is a GOOD thing. Add to that Johnny Depp as the mad-hatter and you have a quirky and twisted movie that makes for interesting viewing

Despicable Me
Another Steve Carrel starrer, this animated flick is rib-tickling as hell. And with a plot that would work only in the animated world, the laughs just keep on coming.

The Karate Kid
Another reboot, this one a far-cry from the original, brings my beloved Chinese action hero, Jackie Chan to the role of the mentor with the new kid on the block, Jaden Smith as the protagonist. With some awesome Kung-Fu sequences and great comic timing between the two leads, this one is definitely  worth a watch.

So there you have it, the Best of the Best from 2010 as I saw it. Feel free to leave your comment and your personal recommendations for the categories.