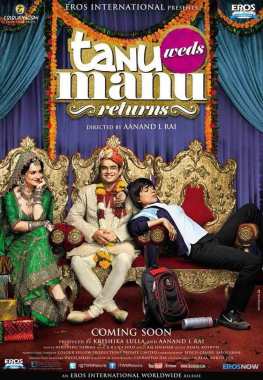 Sequels are always tricky. Especially when you haven’t planned for them during the first movie. So when a Part 2 of any story is a success, it’s a BIG thing. Especially in the Indian movie industry. Thankfully, Tanu Weds Manu Returns is a resounding success. Despite being a sequel, it does not feel inferior to its predecessor in any manner. In fact, in many ways it is a far more entertaining flick than the previous one.

Picking up approximately 4 years since the events of the previous movie, TWMR starts off on a sour note for the protagonists as they seem to have hit a roadblock in their marriage. Following a hilarious counselling session at an English Mental Institution, our male lead is committed into the asylum whilst our leading lady promptly packs her bags and heads back to her hometown on Kanpur in India. Manu is released from the asylum thanks to his friend and confidante, Pappi (brilliantly brought to screen once again by the talented Deepak Dobriyal) and also heads to his hometown of Delhi. Both spouses in a fit of anger and slight misunderstanding decide to proceed with divorce. Our hero takes it a step forward by finding a replacement beau who as luck would have it bears a striking resemblance to his first one. What ensues is pure delight! Despite an ending that seemed predictable, the movie does manage to keep you guessing till the last-minute on the final beau of choice.

Kangana Ranaut is undoubtedly the highlight of the movie. Heck I’ll say it, she IS the movie! She portrays the eccentric and impulsive Tanu as well the tomboyish sports rebel Kusum. And shines magnificently in both avatars. Where other double role movies have characters that are diametrically opposite (Seeta Aur Geeta, ChalBaaz, Ram Aur Shyam) TWMR doesn’t fall into the stereotypical portrayal. Instead what you get are two very strong and powerful characters who are essentially a reflection of their circumstances and share many traits and desires. It is easy to understand our leading man’s dilemma as he is forced to choose one over the other during the course of the second half of the movie.

Barring the initial few scenes shot in the English country and the capital city of London, the entire movie is shot in locations across northern India including villages and towns. The authentic houses and backgrounds add a certain dimension to the movie that makes the story feel more grounded and real. The story resonates with the realism of the lives of a majority of Indians who don’t inhabit tall skyscrapers of select metropolises but are in abundance across the so-called tier-2 cities, towns and villages. Karan Johar, you certainly would not approve. Personally I love such stories and backdrops.

That this is a romantic comedy is imbibed even in the songs of the movie, specifically the cute I’m an Old School Girl. But the comedic brilliance lies in the absolutely witty one liners and punch lines that all the characters have in bountiful. The humour of the movie is scattered not only in the brilliant dialogues but also in the body language of some of the characters, most notably that of Pappi. Even the manner in which he eats snacks in a scene tends to bring a short guffaw out of the audience. There are slapstick moments, however they are few and far apart and not of the crass nature.

2015 is still not halfway done. But despite what future performances are to be experienced, in my mind the top accolades for best actor female should definitely go to Kangana Ranaut. This lady has time and again proven that you do not need to come from a “filmy” background to be a great artist. Last year’s Queen had proved all her critics wrong and with TWMR this year she has only further cemented her spot at the top of the pedestal. If you haven’t seen this brilliant Rom-Com entertainer, do yourself a HUGE favour and go watch it!

© Abhijeet Gandhi and Stochastic Musings, 2006-2015. Unauthorized use and/or duplication of this material without express and written permission from this blog’s author and/or owner is strictly prohibited. Excerpts and links may be used, provided that full and clear credit is given to Abhijeet Gandhi and Stochastic Musings with appropriate and specific direction to the original content.
Loading Comments...
Comment
×
%d bloggers like this: