So here we are, the fourth month of the 52 in 2015 challenge. A bit of a mixed bag like the previous months. But some really good progress on many fronts.

Starting with my fitness, my weight is still a long way from the target number but at least I seem to be ensuring that I don’t gain any more weight. But my step count has also been a tad under the mark as I haven’t seem to breaking the average of 12k per month.

I was however able to stick to a health challenge that initially seemed  a tad impossible to complete, going a full month without refined sugar and a month without sweets. The challenge also seems to have changed my eating habits for good.

Even though the month long deprivation ended, I have begun avoiding sugar in my beverages more often than not. And sweetened carbonated beverages are a strict no-no. I do allow myself a cheat day to enjoy sweets occasionally though. Maybe I can limit that cheat day to once a month to make the most of this diet change.

The money challenge seems to have hit a roadblock that I can’t seem to get around. Hopefully I will be able to make come progress soon. But at least I’m ensuring my credit card debt doesn’t grow any more and have been diligently making payments to reduce the amount.

This month I was also able to watch not one, not two but three new movies at the theatre. Each one a whole lot different from the other, but all three equally awesome. And although I was able to blog my thoughts for only two (FF7 | A:AOU) of them, I loved all three.

Speaking of blog posts, I also managed to better to my quota and churn out three new posts (apart from the 52 in 2015 monthly update one). And two of them were flash fictions (Story 1 | Story 2). I’ve started enjoying penning short stories and look forward to making it a monthly affair.

My photography challenges are going strong. Additionally my commitment to my hobby also saw me start a Facebook Page and tie in with the photoblog. Let’s see if this hobby of mine leads me to bigger things!

April also saw me discovering new eating joints as well. Each one with a different vibe and ambience, the three restaurants were a definite hit with me. Although I do have a special place for Myra’s Beach Club.

On the culinary front, I have been still unable to catchup. With only one new recipe and no cocktails I am effectively behind schedule. Hopefully I get to don the cooking and bartender hat in the coming months. But at least now I have some great recipes to whip up when the wife is feeling under the weather. 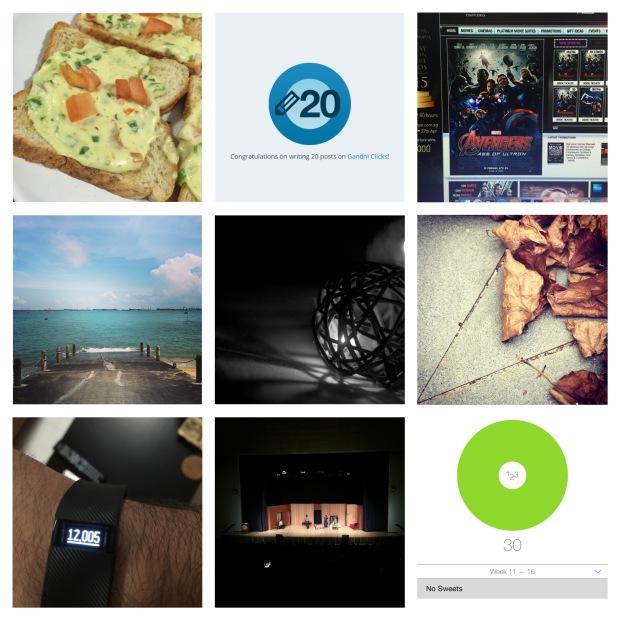 There you have it. My progress on the 52 challenges in the month of April. There is definitely room for improvement and picking up the pace on a lot of the tasks. But the month did see me making good progress on a number of fronts.  So I would say April has been a great month for the challenges.