In the Summer of 1988, cine-lovers were treated to yet another romantic flick from the Nasir Hussain Films banner, Qayamat Se Qayamat Tak. This one, a desi adaptation of William Shakespeare’s romantic tragedy Romeo & Juliet, became a hit and ever since has been a staple on every movie channels romantic flick line-up.

But apart from the movie’s story and its popularity, there was another element to this flick that perhaps is more significant. QSQT marked the debut of Nasir’s young nephew, Aamir Khan. The ‘chocolate boy’ was a nationwide sensation with his charm and soft spoken persona and became the new kid on the Bollywood block.

Fast forward 21 years, that new kid is now one of the most commercially successful actors in the country. With a body of work that is more diverse than our nation’s population, Aamir Khan is an artist par excellence. His deep commitment to every project, that he is part of, is in a word, commendable. Khan has long shed the chocolate boy image and has since donned many different hats on and off the screen.

With his latest movie (well as an actor at least!) Aamir went all out with the publicity drive, to the extent that his personal blog dons the new movie’s theatrical poster on its home page.

He may not be considered as a superstar in the same way as his contemporary, Shahrukh Khan. But ask any decent film critic and he is certain to tell you that of the two, Aamir is definitely a true actor. And I agree. Aamir’s versatility and knack for perfection is apparent in every role that he has portrayed over the years.

Over the past two decades, Aamir Khan has been part of many movies, most of which have been absolute gems. But there are a few movies that I feel truly reflect this actor’s brilliant talent. Here are my top picks, starring Aamir ‘the actor’ Khan that any Khan fan must watch ~

Another hit from the Nasir Hussain Films banner, and yes another romantic flick. But this one is a high school romantic caper (possibly the only successful one!) and doesn’t end tragically unlike QSQT.

Khan is the spoiled younger sibling of a high school bicycling champion. Aamir’s wayward ways and despise for the sport and his gradual transition to becoming the new champion of the bicycling event forms the crux of the movie.

One of the many highlights of the movie is the musical number, ‘Pehla Nasha’, which is undeniably one of the most amorous and romantic songs to be ever written and composed in Indian cinema.

A cult classic, this is the only movie in which Aamir shared screen space with another Khan, Salman to be precise. Aamir and Salman star as two hapless youngsters who are on their way to win the hand of a supposed NRI damsel.

Throughout the movie, the two Khan’s, Amar and Prem, are trying to one up each other. The plot gets many comical twists thanks to brilliant performances by the supporting cast which includes Paresh Rawal and Shakti Kapoor.

Although there is no coherent character to portray here, Aamir is at his slapstick best in this movie. With absolutely inane dialogues and equally inane comic situations, Aamir’s comic timing is commendable.

Okay, most of us probably only remember Urmila Matondkar’s steamy dance moves, but for those of you who actually saw the movie you would agree that Aamir was absolutely brilliant in this movie.

Aamir plays a typical Bambaiya bhai in this movie, who sells movie tickets for black and lives his life to the fullest. Khan has a crush on his friend, Minnie, who is an extra in the movie business but dreams of becoming a superstar someday.

Khan’s portrayal of a ‘tapori‘ became a benchmark for all wannabe ‘Munnabhais’ and is one of his most memorable roles till date.

Aamir plays ACP Ajay Singh Rathod, a senior police official investigating and eventually bringing down, with his team, the terrorist network plaguing the country. Khan shares the screen with Naseeruddin Shah, another fine actor, in this one.

The movie in itself is a rare gem, and Aamir gives one stellar performance with superb dialogue delivery. Khan’s character seems so grounded in reality that it is very easy to forget that he’s actually playing a part in a movie.

Now here’s a movie that is an absolute masterpiece! Lagaan is the story of how a village defied the then British ‘Raj’ and defeated the Queen’s men at their own national sport of cricket.

Aamir plays the village lad, who believes in the ideals of independence, freedom and equality and who leads his team of players to victory in this epic tale of good versus evil.

Khan’s commitment for the role was again apparent as he perfected his accent, diction and look to bring that authentic 19th century rural feel to his character.
The movie also marked Aamir’s foray into the production business and highlighted his strong business acumen. 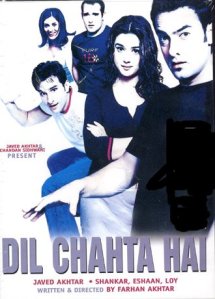 Another cult, classic, Farhan Akhtar’s directorial debut pitted Aamir with Saif Ali Khan and Akshay Khanna in a story about three friends and the ups and downs in their lives.

Khan plays a typical urban youth, who doesn’t believe in the concept commitments of any sort and lives life one day at a time. This is pretty cool considering that he was already way past 35 when he played the character.

Aamir’s witty dialogue delivery and knack for looking the part make this movie an absolute must watch for any Aamir fan!

Director Rakeysh Mehra’s solo hit, here Khan is an Delhi University ex-student, who hangs out with his college friends.

Khan and his friends, enjoy the good life with a happy-go-lucky attitude until an event shatters their world. Their transition from the carefree to the brave and revolutionary is what Rang De Basanti is all about.

Despite being an ensemble movie, Khan is outstanding in this flick. His rendition of a typical Delhi student is uncanny Once again the actor in him surprises us all with his penchant for perfect diction and body language. Khan also lent his voice to a song in the movie. Now that’s what I call multifaceted!

Khan wasn’t the protagonist in this one as he made the transition from actor to director. TZP was a movie that dealt with a very sensitive topic, that of dyslexia among children and the society’s perception of the disorder. And Khan’s direction paid off as the movie enjoyed both critical and commercial success.

Khan’s many years as a fine actor are obvious as his direction captures the best from every actor in the movie. Damn even behind the camera, this man is a genius!

And now, the Khan is all set to entertain us once again with his rendition of a college student in Rajkumar Hirani’s  3 Idiots a cinematic adaptation of Chetan Bhagat’s five point someone. I for one am definitely going to catch Khan’s latest (and probably blog about it as well!). I am still stunned that despite being 44, he is still managing to look younger than Sharman and Madhavan in the 3 Idiots promos!

Aamir Khan, an actor, a producer and a director par excellence. Truly, this Idiot deserves to be appreciated for his awesome talent and unparalleled genius.

2 thoughts on “One Idiot To Rule Them All”