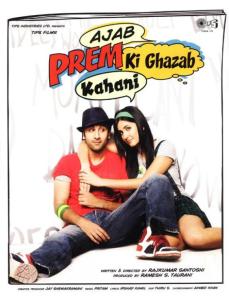 What was touted as the romantic comedy of the year turned out to be yet another average flick. Raj Kumar Santoshi’s Ajab Prem Ki Ghazab Kahani disappoints cinema-goers with a lackluster plot and very predictable story.

Boy meets girl. Boy loves Girl. Boy becomes Girl’s best friend. Girl in love with Someone else. Boy willing to sacrifice love for Girl’s Happiness. Someone else not perfect match for Girl. Girl Realizes that Boy is true love. Boy and Girl confess heir love to each other and live happily ever after. That is APKGK in a nutshell. Okay maybe I’m being a little harsh. But the story is pretty ordinary with nothing terribly fresh to offer.

The movie is essentially a romantic comedy focusing on Prem (Ranbir Kapoor) and his love interest, Jenny (Katrina Kaif). The first half focuses on the attempts by Prem to express his love for Jenny. Barring a few scenes, this portion of the movie is a bore and makes you wonder where is it all heading? Post interval the pace picks up and so does the humor, but marginally. The movie does have its moments where the audience will crack up. My personal favorites were the dialogues between characters of Ranbir and that of his father (Darshan Zariwala).

The USP of the movie, apart from the director, is of course the lead pair. Both Ranbir and Katrina are part of the new generation of actors and are youth icons in their own right. Their appeal to the respective sexes (or whatever sex!) will definitely bring in the initial crowds. But alas eye-candy is not enough to fill the theater seats.

The young Kapoor is as dashing and as suave as can be, even when he plays a small town dreamy-eyed lad. Katrina, well her appeal lies on multiple levels, unfortunately none of them are related to “Good Acting”. This is yet another movie where the sexy lass fails to emote beyond a few scenes. However her performance seems Oscar worthy when compared with that of Upen Patel. Dude, seriously you were doing so good as a model!

If there is someone who manages to keep you from walking out of the theater, it is Ranbir Kapoor. The New Kapoor on the block proves his mettle with this movie as he manages to carry the rom-com almost single handed all the way through till the end.

Some may argue that the disappointment arises due to the inevitable comparison between APKGK and Santoshi’s comic masterpiece Andaz Apna Apna. True as that maybe, it doesn’t overshadow the fact that APKGK isn’t a very GREAT movie to begin with. One can’t even say that the story had great potential, since it isn’t a very original script. Santoshi has attempted to pull off a Jab We Met mixed with a little Namastey London garnished with a dash of his own Andaz Apna Apna. The result is one not very memorable romantic comedy.

One of the few things, that I liked, was the song and dance sequences. Most of the songs (well at least the ones that are doing the rounds of the radio chart toppers), have been beautifully shot. They have a very music video feel to them. I especially liked the number ‘Tera Hone Laga Hoo’. Although I still don’t understand why Santoshi insists on filming his naach-gaana outside India?

Surprisingly many newspaper critics have given rave reviews for the movie. I guess that just goes to show that everything is up for sale these days! Frankly, I’d say don’t waste your money to catch this movie with an overly priced multiplex ticket. Instead watch it as a matinee in a few weeks. Or better yet, wait for a month or two and some desperate satellite channel is bound to showcase this as their “Super hit” of the month.