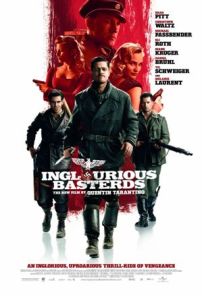 First there was Mr. Pink (and Mr. Blue and Mr. White and so many more colored men!) in Reservoir Dogs, then there were Vincent Vega and Jules Winfield in Pulp Fiction and finally we had the “Bride” In Kill Bill Vol.1 & 2. Now the film legend, Quentin Tarantino brings us Nazi hating Americans, Germans and Italians in Inglorious Basterds.

The protaganists, the “Basterds” are a group of Jewish-American soldiers during the second world war. Led by a brilliantly charismatic Brad Pitt, these Yankees are deployed to German occupied France with the sole intention of striking fear into the heart of Germany by killing her soldiers in a gruesome and grotesque manner.

Although the title may suggest that the movie chronicles solely their exploits, the Basterds are not the real story. We are introduced to a few interesting characters who take their places at equally interesting junctions of the story as it unfolds. A German SD officer, the escaped Jewish girl in French guise, the British soldier, a rather quirky German propaganda film director with his interpreter, the war-hero turned film-actor and a very questionable German movie actress complete the list.

The central plot involves the attempt at assassinating the leader of the Third Reich, Adolf Hitler and it is this plot that constitutes most of the movie. Each character plays his/her part in furthering the story across five distinct chapters, some with rather funny titles (see chapter 5: Revenge of the Big Head!!!!). The no-holds barred climax is the icing on the delicious devil cake comprising of a very dramatized, albeit historically inaccurate, ending to the Third Reich.

Although a set during the infamous second world war, the movie is not a war film, but is more like a spaghetti-western of the 60s and 70s. But Tarantino, being Tarantino has mixed it up a bit. So don’t be surprised to hear contemporary music or see some random squiggly lines with informative text or listen to Samuel L. Jackson’s voice on two separate occasions!

Being a Tarantino movie, performances are stellar by every cast member, but even then, there a few gems that shine brighter than the rest. Among them are Brad Pitt as Lieutenant Aldo Raine and Christoph Waltz as Colonel Hans Landa of the SD. Waltz’s performance in the movie has already earned him a Best Actor award at the 2009 Cannes Film Festival. Waltz and Pitt are simply electrifying throughout their time on screen. Another common feature in Tarantino’s movies is the dialogue. Some feel that the whimsical director overdoes the use of words and one-liner in the stories he tells. But I feel that it is this use of simple mundane dialogue that brings out the brilliance in his story-telling. Not to mention that some of the most zaniest conversations have emerged from QT’s movies (Mind if I have some of your tasty beverage to wash this down with?)

The movie has intense and gory scenes (then again which Tarantino movie doesn’t), and trust me when I say this, the violence is gut-wrenching, so if you don’t have the stomach for it, don’t watch the movie (but what the hell watch it anyway, you can always wipe your mess later!).